What do you do, that your not aware of?

A work colleague once said to me...
'Danielle, you are your own worst enemy.'

I was completely shocked and genuinely baffled by why she might think that.
Sure....I was what I liked to call ....'polite', 'realistic' and 'self competitive' - whatever that meant...?
I dismissed the remark, with my usual apology, for what...I'm not entirely sure, and backed out,
closing the door to the little office, with a guilty demeanor.

But I had not closed the door to the memory of her flippant, yet well meaning remark.
The door to my neural pathways had been opened and the wheels churned around in my head,
over and over like rehashed dough in a bocketty old bread mixer.

No one had ever said this to me before. Why would she say such a thing?
My first reaction was one of rising indignation.
Who did she think she was? Was it not obvious I was just being polite??
Was she so perfect, that she thought she could just say something like that to me so bluntly?

And yet......I started to question my flushed emotions. She had triggered a nerve.
Maybe, just maybe she had a point.

I had been in the business of reading people long enough to know there is always some truth in something one takes the time to say.
I had often had to address issues and habits with people they were unaware they actually had.
And it always surprised me that they never realized they did these things and often were so utterly shocked, indignant and completely un-receptive to my attempts to convince them otherwise.

Was I going to be one of them?
Nope. I was good at listening and reading between the lines or straight at them as in this case!

This girl was a very deep thinker, analytical and very smart albeit sometimes maybe a little blunt.
Although very well meaning she didn't mince her words,  and so I started to think....
maybe, just maybe she had a point, maybe because...she had simply witnessed it!

I realized then very quickly, (I was very open to change at the time and working enthusiastically on my personal development) that she was completely correct of course. 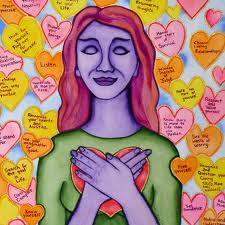 My mind had expanded. New pathways were being opened.
I was discovering new things FAST!

Shortly after with the help of my newly discovered NLP techniques, I worked on silencing my self-critical inner voice.
Six months later, people started to say I had changed.
Something in me was now very different.

I would simply smile.
Yes, it was.
For my work colleague... Thank you x

Danielle Serpico
NLP Life Master Practitioner
'We have to learn to be our own best friends,
because we fall too easily into the trap of being our own worst enemies.'
Roderick Thorp.
If you want to learn how to silence YOUR Critical Inner Voice
enroll NOW on my NEW 'Be nice or be silent' Workshop,
coming to Dublin this summer (-:
email me TODAY for a place at
neurocombatives@gmail.com
Plus...1st Skype Consultation is FREE!
And now...come over to my sister site for more....
http://neurocombative.blogspot.ie/
Posted by Unknown at 00:25